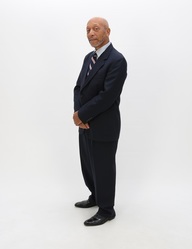 ﻿Pastor Richard Dove﻿ was born in Washington, District of Columbia in 1945 to the late Arthur and Mary Dove. He is the youngest of nine siblings. He was introduced to the salvation plan at an early age. In 1978 while attending Holy Temple Church of Christ in Washington, District of Columbia, under Bishop Joseph Weathers, he made a confession to follow Christ. That was the true beginning of his salvation walk.

In 1979 Pastor Dove moved to New Haven, Connecticut, where he met and married the darling former Priscilla Harper. Combined, they have five children, one daughter-in-law, and four grandchildren.

Pastor Dove accepted the call into ministry in 1980 under the leadership of Elder William Petterson at Glorified Deliverance Church, where Bishop Ralph Nichols was Overseer. In 1988, Pastor Dove moved his family to Durham, North Carolina. He joined Greater Waltown United Holiness Church and served faithfully under the late Pastor Charles Waddell.

Pastor Dove is a preacher and teacher of Holiness. He desires to see consistently the Divine Healing Power of God manifested.